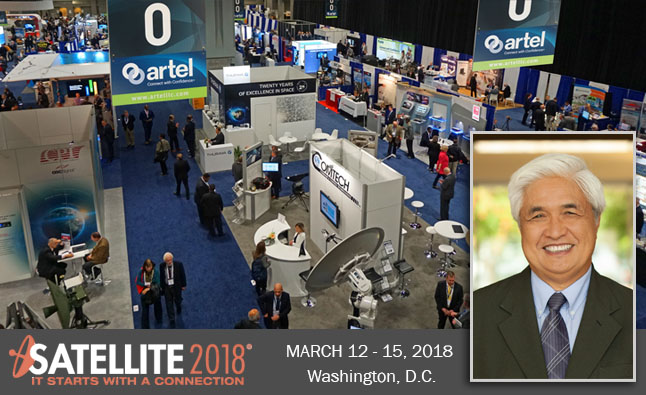 HERNDON, VA, May 2018 ― Artel enjoyed a productive and successful experience during the Satellite 2018 conference in Washington DC, which included the well-attended presentation from noted scientist, XT Vuong entitled “MARS Payload Technology Applications for HTS”. Over the course of more than 30 years, Dr. Vuong has witnessed and remained intrinsically involved with command and control communications and the management of capacity on countless GEO satellites. His industry involvement and expertise highlight the growth and value of satellite communications, securing Artel’s leadership and expertise in the field, and his participation stretches beyond presentations for industry events. “We care about the community and the industry when we offer our experiences to students and potential future satellite industry experts,” offers Dr. Vuong. “ This is why I am looking forward to serving as a judge during the SSPI scholarship competition on April 21st”. Throughout his tenure with Artel, Dr. Vuong has witnessed rapid growth and diversification within the industry, always keeping his finger on the pulse of the latest advancements. Dr. Vuong is also looking forward to attending SOFIC 2018 this May, along with Ed Spitler, Head of SATCOM Programs and Todd Cress, SATCOM Manager.

HERNDON, VA, March 2018 – The United States Air Force (USAF) awarded Artel its Commercial Satellite Communications (COMSATCOM) Pathfinder #2 contract (PF2). PF2 is the second contract award in the COMSATCOM Pathfinder program series. The goal of the program is to take advantage of new buying methods for COMSATCOM services that satisfy heightened security requirements. It is anticipated that the Pathfinder program will realize significant cost savings over traditional short-term leasing options. The Air Force has developed a series of COMSATCOM pathfinders each addressing a number of potential risks as the Air Force learns how to buy and contract for more affordable, higher performing and more mission assured/flexible COMSATCOM services.

In response to PF2, Artel assembled a team to include satellite operator Hispasat and satellite bandwidth provider and hosted payload development expert Hunter Communications. The Artel Team created an innovative solution that uses the spectrum of three existing transponders on the Amazonas-2 satellite to form a single 108-MHz transponder on its replacement Amazonas-6, materially enhancing the value to the Air Force. In addition, the transponder will comply with government-specified enhancements related to heightened security requirements. The transponder will have a life expectancy of 15 years and will be available for use by the end of 2022.